We have listened to YOU – our valuable clients! – to create our new Bi-NateLine™ (BNL) of saddles!  You have asked for a lighter saddle, a softer seat, improved comfort, and a closer connection to your horse.  The experience of over 40 years in the equestrian industry working with over 150,000 horses and riders, combined with our affiliation to equine professionals all over the world, has allowed us to integrate our state-of-the-art scientific diagnostic tools (including the Seaver Horse girth which monitors all sorts of metrics; the MediLogic® computerized saddle pad to determine pressure distribution; plus a Polar Heart Rate Monitor and thermographic imaging camera) to help determine optimal fit. 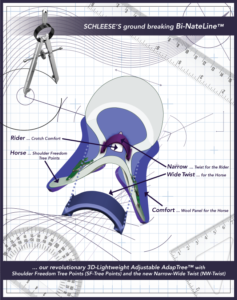 Our Bi-NateLine™ (BNL) saddles are made on our infinitely adjustable lightweight patented AdapTree® which outperforms any other tree on the market today. This tree offers an industry-changing extreme close contact to the horse, soft-ride seat and an innovative “NW-Twist” – extra narrow twist for riders and at the same time the widest twist for the horse. It also requires fewer adjustments due to the standard PSI panel.

The Bi-NateLine™ not only combines form with function but provides the lowest pounds per square inch pressure distribution on the horse’s back with the PSI panel. It will support a longer-lasting softer, closer saddle fitting. Watch video below.

Our innovative double swoosh logo represents the harmony and connection between horse and rider. Try out our new
Bi-NateLine™ for yourself and feel the difference Schleese makes! The development of these saddles represents the future of the industry!